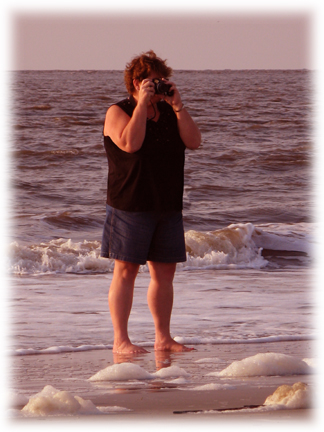 Arkansas Native, Debbie Overton – now a Georgia photographer, artist, author, and creative entrepreneur – shared her first artistic talents as imprints on the family coffee table.  It was there that she learned to draw, write her name and ABC’s – and later, to spell and complete her math homework.  Over the years her talent and leadership abilities inspired her to help others through various organizations…while raising three children and working full time outside their home.

Art has always been a part of Debbie’s life in one form or another.  In the early 90′s she worked with sales reps – wholesaling and hitting the trade shows with her original mixed media art and art reproductions, in the form of prints, notecards and more.

After her family relocated to coastal Georgia in 2006, Debbie rediscovered her connection with nature – and soon discovered a new art medium.  It was here, where the tranquil colors of sea and sky meet the sand and salty air – that she was compelled to pull out her camera and capture the world that she loves.  January 2012 she packed up her studio when the family moved to the mountains of NW Georgia to discover what may be hidden around the next curve or over the next hill – always with her camera in hand!

Mixed Media Collage as well as Photography by Debbie Overton has been published in various books and magazines, as well as exhibited in various galleries and art shows in Arkansas, Pennsylvania, and Georgia.  Her work is sought by collectors from coast to coast.

Debbie feels each step she has taken over the years has led her to the woman she is today – confident and comfortable with whom she is as an photographer, artist, and business woman.  She often wonders if her classmates of 1976, were given the chance - would they still vote her ‘Most Bashful’ today!